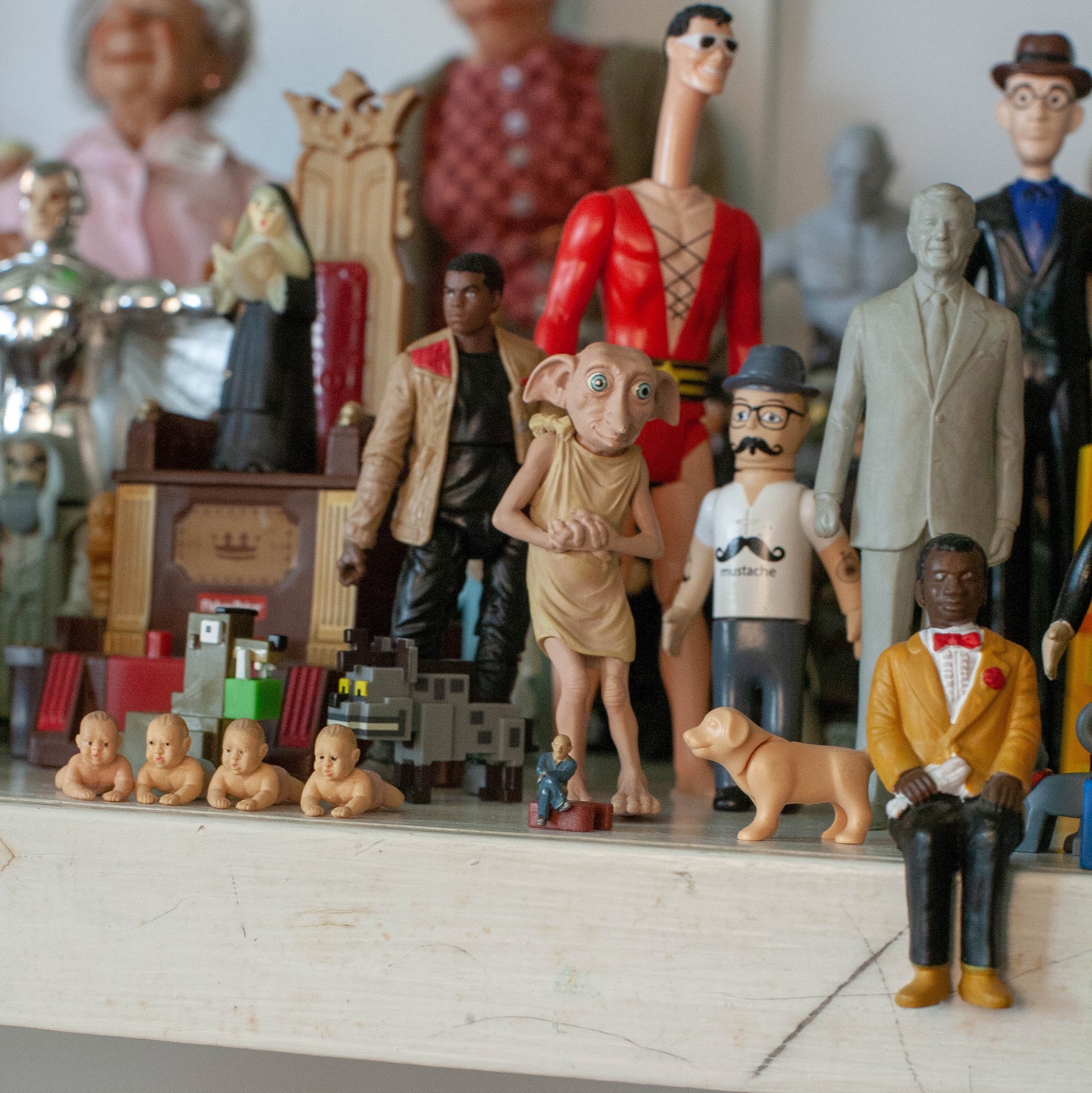 Artist Jarvis Rockwell’s massive 2002 installation Maya introduced MASS MoCA visitors to Rockwell, whose detailed wall-drawing continues to delight museum-goers and concert audiences just outside of the museum’s Club B-10. Rockwell returns to MASS MoCA with a new large-scale installation, Us. In Us, figures from Rockwell’s massive collection of toys and figurines interact and organize themselves on glass panels, soaring over visitors’ heads in the historic light well of the newly renovated B6: Robert W. Wilson Building.

Rockwell began assembling his ever-expanding collection of toys and figurines in 1979. Numbering in the hundreds of thousands, his toys run the gamut from classic action figures to Japanese monsters, bobble-head dolls of politicians and artists, Yodas, Betty Boops, Troll dolls, Pez dispensers, Tin Tins, toy soldiers, and endless amounts of plastic furniture (“for the occasional elderly toy to sit on”). In his thoughtful arrangements, groups of figures gather as though in conversation with one another, approaching and drifting apart in a bewildering array of organic interactions. In his 1985 exhibition Toys at the New Museum, NY, eight identical figures wearing suits and panama hats anxiously adjusted their ties in unison, a coiffed doll with bright blue eyeshadow enthusiastically greeted an approaching Viking, and James Brown relaxed, feet up, on a blue ottoman.

As the exhibition’s title suggests, for Rockwell these figures stand in as avatars for ourselves — “alternatives to us whom we can interact with” — which act out the fantasies, beliefs, and values that shape our understanding of the world. In his own words, “We build what we are, what we think, and what we live.” Rockwell uses the term Maya, adopted from Hindu Sanskrit, to understand the way we attach illusions to the visible world. On a notecard that he carries in his wallet, Rockwell defines the term in relation to his practice as:

The stepped structure of Us also points to Rockwell’s fascination with the spiritual realm. Spanning the length of the light well, ten glass planks hang from the ceiling in an ascending, curving line. The upward motion of the floating glass shelves conjures a feeling of ascension, and perhaps even reincarnation. As Rockwell sees it, “[The toys] are going on to glory.” Imbued with a physical and spiritual depth, Rockwell’s figures evoke a multiplicity of narratives that are at once whimsical and distressing, capturing the complexities and outlandishness of our own existence.

Rockwell approaches each installation of toys organically, responding to both the site and the needs of the various toys. Though most of the figures “socialize” in groups, the artist explains, “There’s always the lonely person that doesn’t talk well with other people, and he’ll be walking by himself.” By listening seriously to the stories that toys have to tell, Rockwell is able to create worlds that feel at once monumental and microscopic in scope, playing out both the quotidian and epic dramas of our lives.